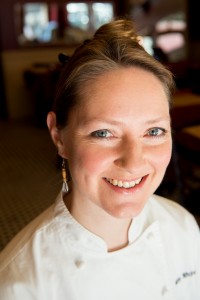 We talk with Ben’s former employer, Abigail Hitchcock about running her restaurant with her spouse and the romantic encounters she’s witnessed in her cozy French Bistro, Camaje. Abby also shares the meaning behind the name, Camaje, and the stories of the three men who inspired it.

Abby grew up on Long Island’s rural East End, known for its fishing and farming. From her mother, she learned to love simple fresh local fare and from her father, an amateur chef who enjoys preparing American and ethnic feasts, a love of reading menus and preparing exotic fare.

Flash forward a few years and a few major milestones – a blue-ribbon cooking diploma, jobs at Martha Stewart Living television and BBC’s Good Food Magazine, three years as a recipe development chef, and running her own catering company – and Abby eventually settled down as a partner and then sole owner of CAMAJE Bistro, a Greenwich Village date-night staple for over 18 years. A certified sommelier, she does wine pairing dinner and, on  select evenings, hosts Dinners in the Dark; sensory feasts served to blindfolded diners.