On today’s show, we take a look at the idea of feeling safe from two perspectives.

First, in light of last week’s election results and the flood of emotions many of us are feeling because of it, we spend a little time checking in on how we’re doing, where we are, and what we need right now. Then, on how we can show a little extra love to those who need it, and what signs of love we’ve seen in the past week, despite all the anger and pain in circulation.

After the break, we’re joined by Jane Alison, the novelist and author of the memoir The Sisters Antipodes, in the second of our shows exploring relationships with family members. Her stunning memoir tracks an unorthodox childhood following her parents befriending another couple with two similarly-aged daughters, and then switching partners.  How did growing up on opposite corners of the globe from her father and stepsisters affect her understanding of romantic relationships, family, and self-identity? How did writing the memoir — which often paints Jane and the family that surrounds her in alternatingly sympathetic and brutally honest shadows — affect their adult relationships? Does she regret bringing her story to light on the page?

Listen 11/14 at 4pm EST on Heritage Radio Network, and download after any time on iTunes and Stitcher Radio.

Jane Alison is the author of four novels—The Love-Artist, The Marriage of the Sea (Farrar, Straus & Giroux, 2001, 2003), Natives and Exotics (Harcourt, 2005), and Nine Island (Catapult, 2016). She has also published a memoir, The Sisters Antipodes (Houghton, 2009), and Change Me, translations of Ovid’s stories of sexual transformation (Oxford, 2014). She is Professor and Director of Creative Writing at the University of Virginia. Find her at www.janealisonauthor.com.

About The Sisters Antipodes 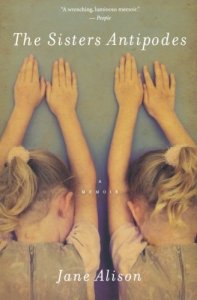 When Jane Alison was a child, her family met another that seemed like its mirror: a father in the Foreign Service, a beautiful mother, and two little girls, the younger two (one of them Jane) sharing a birthday. The families became inseparable almost instantly. Within months, however, affairs ignited between the adults, and before long the parents exchanged partners, then divorced, remarried, and moved on. Two pairs of girls were left in shock, a “silent, numb shock, like a crack inside stone, not enough to split it but inside, silently fissuring” that would prove tragic.

Read up on The Sisters Antipodes in Jane’s New York Times Modern Love essay, her interview on WNYC’s Leonard Lopate Show, and her interview with the Guardian. Then go buy it, read it, and email Jacqueline (lovebites@heritageradionetwork.org) when you wanna talk about it. xo 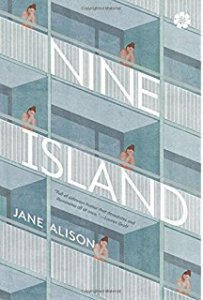 Nine Island is an intimate autobiographical novel, told by J, a woman who lives in a glass tower on one of Miami Beach’s lush Venetian Islands. After decades of disaster with men, she is trying to decide whether to withdraw forever from romantic love. Having just returned to Miami from a monthlong reunion with an old flame, “Sir Gold,” and a visit to her fragile mother, J begins translating Ovid’s magical stories about the transformations caused by Eros. “A woman who wants, a man who wants nothing. These two have stalked the world for thousands of years,” she thinks.

When not ruminating over her sexual past and current fantasies, in the company of only her aging cat, J observes the comic, sometimes steamy goings-on among her faded-glamour condo neighbors. One of them, a caring nurse, befriends her, eventually offering the opinion that “if you retire from love . . . then you retire from life.”

Buy it, and find more at www.janealisonauthor.com.