He covers savory, she covers sweet, and everything else comes together between them. That’s how chefs Andrew and Kristin Wood have been working together since they first met, and how they do now as parents and co-owners of Russet in Philadelphia. Many years, several moves cross-country, and two children later, they’ve got many pearls of wisdom to share on how they make it all work. So sit back and enjoy the second of our Power Couples series.

About Andrew and Kristin Wood 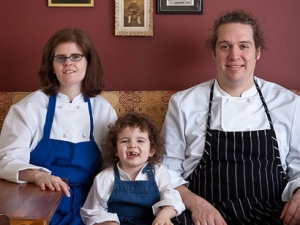 For Ohio-native Kristin Wood, helping out with family dinners was a chore. Baking, on the other hand, soon became a sweet escape. Wood took her young passion for pastry San Francisco, where she attended the California Culinary Academy. After graduating with a pastry arts degree, Kristin moved to Boston for a job at Michael Schlow’s Radius, where she met her future husband and chef-partner, Andrew.

Chef Andrew Wood began his culinary journey at L’Academie de Cuisine in Gaithersburg, Maryland, followed by a post at Le Bec-Fin in Philadelphia. His next step took him to Boston to work under Michael Schlow at Radius, where he met his future wife and pastry chef, Kristin.

The couple soon relocated to Chicago, where Kristin worked on Grant Achatz’s team at Trio and Andrew cooked at Tru. And after having studied in some of America’s top modernist kitchens, the Woods immersed themselves in the opposite side of the culinary spectrum. Moving west, they settled in farm-to-table mecca, Napa Valley, where Andrew worked at Terra under Chef Hiro Sone. The Woods then moved to posts at Quince in San Francisco, solidifying their commitment to sustainability and local sourcing.

Though West Coast cooking had grown to define them, the Woods felt a pull back to the East Coast and family. And Philadelphia was a natural spot to call home with the agricultural bounty of nearby Lancaster County. Before opening Russet, Andrew worked at Maia, James, and Fork. In early 2012, the couple opened BYOB Russet in a restored 1800s townhouse. Sourcing almost exclusively from local farms, practicing whole animal butchery, and preparing to build an apiary in the spring, the Woods are making good food and good stewardship their inseparable mission.