Cynthia Cherish Malaran was making mad money as a freelance graphic designer. She was married. She was “successful.” But she was miserable. Then she got in an accident that left her body shattered and her mind with amnesia. Over a year into her recovery, music started to trigger her memories and she began to rebuild, leaving her miserable self behind. Then she got a diagnosis of a violent, advanced form of breast cancer.

“If I hadn’t gotten into that accident, I would have still been miserable in this other job. Making money, but dying very slowly. And miserable.”

Join us as Cynthia talks through the two tragic events that brought her life a New Beginning so rich that she’s now been regularly called the “Drama-Free DJ” who’s worked for clients from Oprah to hospice patients to women in prison. She has quite the story to tell. 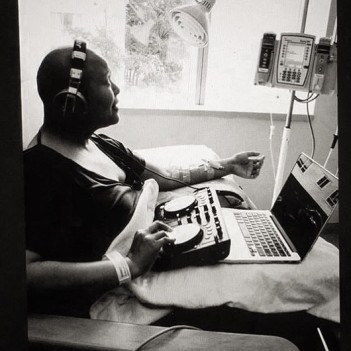 Cynthia Cherish Malaran dedicates herself to spreading freedom of movement, joy, and healing via music, rooted in a mindset she entitles “Music Heals.” She has taught DJing to children and adults ages 9-86, most recently to young girls at the Lower East Side Girls Club. DJ CherishTheLuv has brought music into the hospice setting, providing palliative pain care for terminally-ill patients. Her work in hospice was labeled “DJing for the dying” as she got paralyzed stroke patients to dance in bed, deaf patients to hear the music, and helped bring comfort in what is referred to in the hospice world as “the good death.”

Also noteworthy, DJ CherishTheLuv does public speaking engagements around the country, from the famous Carolines on Broadway comedy club to women’s workshops in the midwest, to the CUNY college system, on healing cancer, domestic violence, trauma and illness via music and dancing. She is also the Women’s Empowerment DJ at Rikers Island, for the Literacy for Incarcerated Teens program, bringing inspiration via music & DJing to the lives of women 16 and over in prison at the Rose M. Singer Center. It’s not very often that a DJ can enter the prison system due to security reasons, and when it does happen, it is a day to be cherished. And, Cherish is her real middle name, given to her by her Mother, after the oldies song of the same name, by The Association (“…Cherish is the word I use to describe…”). DJ CherishTheLuv got her DJ name from GZA, of the Wu-Tang clan, a friend she would play chess with from time to time.