We’re excited to kick off our four-part series on technology and dating on September 19th with the ladies of the No Text Weekend. Until then, here’s a piece that Jacqueline wrote for the Huffington Post and Heritage Radio. Stay tuned for when we welcome Nanaya founder Rashied Amini to the show in October, and check out the full interview with Amini HERE.

When we started on this relationship show journey a year ago, I had no idea how much of my time would be spent actually studying relationships from a scholastic perspective. I’ve been on so many dating sites, read dozens of books penned by guests (or potential guests), analyzed countless articles, and skimmed advice from people named Polly and Prudie. The sum of my recent studies (and my years as a curious journalist) translates into me being able to actually give sound, compassionate, informed guidance to others looking for love, too.

But does any of this knowledge make a disappointing date or breaking things off with another guy feel any better? Hell no. Like all the Carrie Bradshaws before me, all of my logic and knowledge and furious passion does not equate to a personal happily-ever-after.

So I turned to some hard-core, data-driven help.

Rashied Amini is a PhD candidate in physics at Washington University in St. Louis and a NASA Jet Propulsion Laboratory engineer (meaning that he’s responsible for analyzing the optimal design of lunar bases similar to what got Matt Damon through years on Mars in The Martian, as he so kindly explained to me in base terms when I got him on the phone recently). As a passion project, he took the same model that predicts lunar-based success and turned it to the age-old question: When will I find love?

“I took all of that math, along with some other inspiration from other products, to the problem of romance,” he tells me. “You can be dating so many different people at different stages of your life, but there is an ideal probability you can focus on.”

His resulting company, Nanaya, brings that probability to the forefront.

Nanaya’s online questionnaire starts simply, asking how you identify sexually, spiritually, and ethnically. Then it delves deeper, polling what kind of political beliefs you are for or against, and how a partner exhibiting certain kinds of actions would make you feel. There are questions about with whom you spend most of your time, how long you expect you’ll stay at your current job or live in your current city, and how often and to where you travel.

Overall, it covers a wide berth, taking a good fifteen minutes to complete if you speed through it. Once you pay the required $4.99 for membership, you get a report that breaks down your odds into pages and pages of graphs and scales. 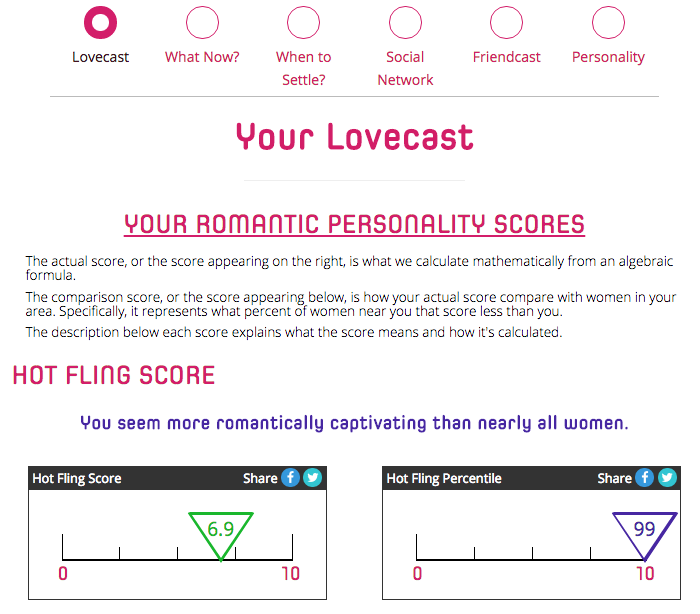 My report was, upon first glance, frustrating in its positivity.

According to the algorithm, I am more “romantically captivating than nearly all women”, meaning that I’m sexually and holistically a passionate lover and have great potential for steamy flings. But I also “appear better at sustaining relationships than the majority of women.” I’m less picky about who I date than other women, and I have stellar odds–the highest possible result on the “romantic opportunity score”–of finding a compatible partner.

There are scales that specifically show when and where I’ll most likely find love, how my odds change over time, in what states and social groups my odds are higher, and the top fields, ethnic groups, and religious communities where I’ll find compatible men. A page of results breaks down when I should ideally settle down (in two years, when I’m 37, gulp), what my personality and social networks are like, and my potential as a friend and potential friendship circle growth. It’s really fascinating stuff.

When I ask Amini where to look for practical application, he sends me to one specific page: “What Now”.

“One part [of the results show] how you currently socialize,” he points out. “And, if you’re interested in a long-term partner, how you should socialize. I think it’s important for people who are frustrated to understand that it’s not just about doing specific things, but about socializing in a way that you’re not currently socializing. You’re probably not unsatisfied just with being single–it’s about the human interaction of doing things that you believe in. If you do more o f that, it should put you in a situation where you’ll naturally attract more people.”

My results point to a rather obvious but annoying reality to face: I socialize mostly with colleagues. But, when I think about it, I don’t date those who I work with… ever, really. I’m open to it, but it’s not a viable track record to rely on for future mating. While I have strong friendships and see my close friends often, most of the socializing is on a one-on-one scale, not in large groups where I may meet their awesome single guy friends. To top it off, my fluctuating health issues have made me less socially ambitious overall.

It ends up my best odds are actually sticking with online dating. Which I’ve waxed on about enough.

But Amini points out that the user application of that information is vital: “Let’s say I’m told to go socialize and do sports,” he explains. “Okay. But which pickup game am I gonna play? Am I going to play something that’s going to attract a lot of straight men, like soccer or golf? These are just a bunch of numbers. We’re humans. So it’s about how we interpret it and apply it. While we should take the numbers seriously, it’s more about how you apply them.”

Translation: Nanaya can tell me to keep online dating, but I have to figure out which site suits me the best, and then I have to do the rest of the work in finding and going out with guys I might actually like.

The second part of the What Now page has specific feedback that points out the incalculable—some people are emotionally unable to commit for reasons that can’t be quantified, others may over-socialize and not take the time to really get to know one person—and also admits that the questionnaire might not yet be adequate in aptly calculating the entirety of the human dating experience. As the user base grows (currently it’s around 100,000 users), the increased data will lead to more accurate results. And, when he’s fully doctored and has more time to spend on analyzing the data, he plans to incorporate more specifics on not just where users socialize, but the potential of others in those social circles.

But for now, Amini still has faith in that the suggestions can help users become better at socialization overall.

“I’ve had a friend who has always struggled so hard to find someone, but he’s only ever used online dating,” he shares. “So I’ve insisted that, ignoring the romantic side of his life, if he were to play more pickup sports or do more activities like volunteering for things he believes in, not only will he have a better chance of meeting people, but he’ll be doing things that are more fulfilling, and so be at a better place for meeting people overall. I want to be able to help people be happier, because I think that helps people get into relationships on their own terms rather than just get into them where they can find them.”

Looking back at this year of dating, I admit that there have been some overall social gains from my search for happily ever after. I dated a few guys who I have valuable friendships with today. In my exploration of checking out of social media and dating apps, I engaged with more people IRL. Reluctantly, I am able to give other humans sound, compassionate advice about their relationships when it’s asked of me. And while I’m no further in committing to one human man than I was a year ago, embracing dating from so many angles makes it more interesting and less, well, personally defeating.

Amini is single, too, and when I ask him if the algorithm has helped him, he admits that it hasn’t really, because he knows everything going into it, and how it works, and so he can intuit what his personal results say. But the process itself made an impact: “I never studied psychology formally, but to understand all the things I needed to understand to reflect dating and socialization, reading up on psychology has given me a lot more contact. I’ve thought more about my long-term relationships, and what worked and didn’t, and why they didn’t. That helped a lot, all the reading for the algorithm.”

Yeah, turning research into self-analysis is something we share.

When it comes down to bits and pieces, I’ll continue to return to Nanaya. I’ll dig deeper into my results and take a harsher analysis of how I’m spending my time, and if my time spent is serving me as best it can. Maybe in a few months I’ll take the questionnaire again, and compare if my results change drastically with a shift in how I fill in my answers. But I won’t consider Nanaya my new dating bible. Which is okay, because Amini doesn’t want me to.

“It’s worth mentioning,” he brings up at the end of our chat, “that I was philosophically against the algorithm as a whole when it comes to being a human being. I was much more into the romance of meeting someone in person, in my real life. I like to put my day job in numbers away, and live in the world.”

I dig that, Mr. Martian.